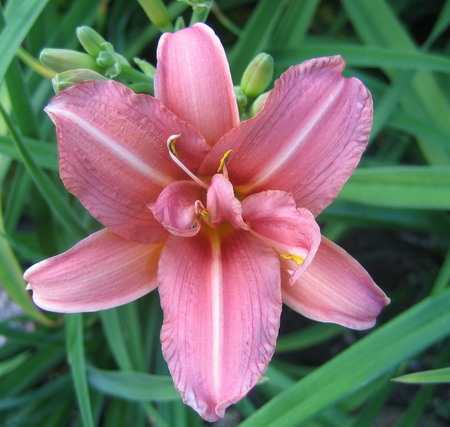 As soon as man became intelligent (in the sense of Homo sapiens), he began to modify nature and has done so throughout his existence. At the beginning of man’s emergence as a species of living nature, these transformations were purely practical – how to make it survive, how to make it so that there was more food, etc.  In this connection, wild animals were domesticated; in connection with this, the first plants were introduced into culture. Of course, in order to eat these plants, not to admire them. As the centuries went by. People have developed a sense of beauty. People began to be engaged in selection not only for gastronomic purposes but also in order to have that flower to which they got used since childhood to be more beautiful, to bloom longer and to be more fragrant. Thousands of varieties of tulips, roses, hundreds of varieties of peonies, phloxes and other favorites of our gardens have already been bred, but our hero – the daylily leaf remained in the position of Cinderella. But, just like in the fairy tale, Cinderella turned into the Princess. Flower lovers had by the end of the twentieth century several tens of thousands of varieties developed by breeders in many countries of the world; and what Dr. Stout began to do in the thirties – to classify the daylily leaf varieties – turned out to be very important and in demand.

1.Classification by type of vegetation

There are three such types: dormant (Dormant or Dor), semi-evergreen (Semievergreen – Sev) and evergreen (Evergreen – Ev).

Dormant. The plants we are most familiar with. Leaves awaken in spring after snowfall, vegetate the whole summer, and in autumn, most often after the first hard frosts, the leaves turn brown and die off, to revive again in spring. Most wild species belong to this group, as well as most varieties of hybrid origin.

Evergreens.  Some wild species of daydaylilies, found in the warmer regions of China and Japan, have leaves that do not die off in the winter or die off only partially. These are primarily Hemerocallis multiflora, H. aurantiaca, an orange daylily, and, described only in 1932, H. pedicellata, as well as several other species. After these species were included in hybridization, a new quality was introduced to the daylily leaf daylily, i.e., leaves that do not die off in winter. Of course, this quality only appears in regions with mild climates. We sometimes have trouble with this feature: frosts come and the leaves, still quite alive and green, freeze, i.e. die. If the winter will be normal – without extreme thaws, everything will go as it should – the snow will melt, and the leaves will grow new ones. But if the winter is “rotten,” like this past winter of 2006-2007, there will be problems. “What kind?” – you ask. And very undesirable: let’s imagine – January, the temperature outside the window is +6-8. The snow has melted, and the daylily leaf wakes up from its forced sleep. Leaves start to grow… and here frosts under 20… Most often the matter is limited to the loss of central buds. The substitutes come into play, and the maximum we lose is this year’s blossoms. In very rare cases, the death of the plant may also occur. But daylilies of this group have advantages over dormant ones: they stay green until the most serious frosts and decorate our gardens.

Semi-evergreen.  Take an intermediate position between the first two groups.

It seems that the average amateur florist should not be interested in how many 22 or 44 chromosomes their favorite has. But this is a very important parameter, primarily because with the advent of Tetraploids, the number of all kinds of combinations for obtaining new varieties has increased many times over. It all started quite a long time ago, over 50 years ago. Daylily leaf seedlings were treated with colchicine (in brief, with the sap of our favorite colchicum, the ageless plant), and a whole era of new varieties with unpredictable qualities began. Tetraploids were larger, brighter, more structured, and probably for this reason, the American Lilinik Society established a special medal that is awarded to the best variety with a doubled set of chromosomes. To be fair, there is also a medal awarded to the best diploid.

In practice, we rarely think about which group a variety belongs to. And this is understandable – why go deep into the wilds of genetics … But! Suddenly you would like to “invent” a new variety yourself! And for this you need to know exactly who we take as parents of a new variety. Only cultivars with the same chromosome set can be crossed with each other.

Different researchers have different approaches to covering this question.  Some use a very simple scheme – early, medium, late. Someone, on the contrary, overcomplicates, and singles out up to a dozen terms and sub-terms. It seems to us that the truth lies somewhere in the middle:

Special mention should be made of the remontant or repeat-flowering varieties. In import catalogs this feature is designated as RE. Most varieties with this feature have no time to re-bloom in our conditions. They lack the sum of positive temperatures. Although there are varieties, mostly not new, which, for our joy, have time to bloom a second time. This is, for example, the well-known Stella de Oro or Black Eyed Susan. And, of course, the “inclusion” of remontaneity directly depends on the weather – if September is warm, without frosts, you can admire the flowering of daylilies and until October!

In this “nomination” everything is very simple: there are fragrant varieties, there are odorless. The fragrant ones have a fairly high proportion of the “blood” of wild species that had fragrance (e.g. daylily of the yellow (H. flava), daylily of the Middendorf (H. middendorfii ) or daylily of the lemon-yellow (H. citrina). In catalogs, this feature is represented by the letter combination Fr (Fragrant).

Here again there is no unity among the components of the variety descriptions. In the database of the aforementioned society of daylily buddies there are only 4 classes: Double, Spider, and Unusual Form, which includes the unusual, sometimes orchid-shaped cultivars. And…all the rest. None of the “wheel-shaped”, “triangular” forms familiar from other publications are in question. Maybe this is right, maybe not at all. It is rather difficult to develop criteria – wheel-shaped or not. In the extremes it is easy, but in the transitional ones it is impossible. Another thing is spider spiders – with them everything is clearly defined: the ratio of petal length to its width must be not less than 5 : 1. It can be more, for especially outstanding varieties, the ratio is 7 : 1 or even 8 : 1!

It is more difficult to do with a large variety. Do you really want to put an old Double Challenge in the same basket as a modern Mary Brown? I want to divide all terry varieties into two categories: “terry” and “strongly terry”.

2) Brown. These varieties are few, but they are very effective in their uniqueness. Examples: Old Termites, Milk Chocolate.

3) Very dark (Dark). One would like to call them black. But, no, they are not black, but very dark red or dark purple, although under certain circumstances they look black. They are both the old Black Prince variety and the newer Black Ambrosia variety, a variety with the somber name Salieri.

4) Gold, Yellow. This group could be divided into two, but it is still difficult to clearly define where yellowness ends and gold begins.

This is an unusually large group of varieties. This is no wonder, as yellow is the color of most wild varieties. In his varietal creation man has tried to improve what nature has given him, and he has succeeded. And how he has succeeded! If you want, you can build a daylily collection of only yellow varieties, and it will not be monotonous. To name but a few: Spider, the well-known little Stella de Oro or the corrugated Homeplace Sunburst. And then there are golden with a greenish throat, golden with a purple eye, or with a lavender rim. It’s impossible to list all the combinations!

5) Lilac, Lavender. A very interesting color – not even remotely reminiscent of the color of wild species. Here we can also include those varieties that are sometimes called blue or blue in catalogs. The fact is that these colors are not in the palette of color varieties of daylilies. Yes, there is a color close to blue, but it is still a lilac color. This does not make it any less interesting to us – this color catches our eye instantly! Among the brightest, in the truest sense of the word, we would like to note the old and much-loved Prairie Blue Eyes, Lavender Deal, Siloam Merle Kent.

6) Near white. I should have mentioned “almost white” because there is no pure white in nature. There are light pink and light yellow, but they are almost white, not snow-white. Although, looking at modern achievements of hybridizers, it seems that the word “almost” (near) can be discarded for lack of use – these varieties are so white! I admire White Hot and Longfields Beauty, as well as Schnickel Fritz, which is still very rare.

7) Orange. Introducing this group, can’t do without Tuscawilla Tigress, a good variety of this color Carrot Top. Very bright, festive flowers in the garden look incomparably better than in photos.

8) Pastel (Pastel). I don’t think it’s necessary to separate them into a separate group, but I can’t help writing, for example, that Pastel Classic is light pink. It is pastel, a sort of watercolor, muted color!

9) Pink. Well, we got to the pink color. There are a lot of pink daylilies. Among them are some real masterpieces, such as the well known Siloam Double Classic or Chorus Line with its beautiful scent.

10) Purple. Includes a deep purple color, as well as purple. A very bright, eye-catching variety! Bela Lugosi or Grape Velvet is one of the purple daylilies.

11) Red. There are probably as many red daylilies as there are yellow ones. Red is a very natural color for red daylilies. Among the red varieties there are the terry Wayne Johnson and the spider-like Mighty Goliath and a simple form, but dazzling bright Chicago Apache.

Speaking of classification, we can’t help but talk about the terminology used to describe daylily of the valley flowers.

1) Troat – Everything is clear with this term: it is deep in the flower, with the stamens and pistil coming out of the center of the throat.

2) Eye zone (eye) – described when there is a circle around the throat in a different color than the throat and the petals surrounding it.

3) Water mark – An area around the throat that is lighter in color than the main color of the petals.

4) Halo, a rim of a different color or, less often, the same color, but less intense, sometimes hard to distinguish.

5) Pistil & Stamen – The pistil is usually one and the stamens 6. Occasionally there are more. It is very beautiful when a light-colored daylily has dark stamens.

Previous Post
Daylilies Agronomy: How to Plant, Grow, and Care for Daylily Flowers
Next Post
A Guide To Daylilies: A History