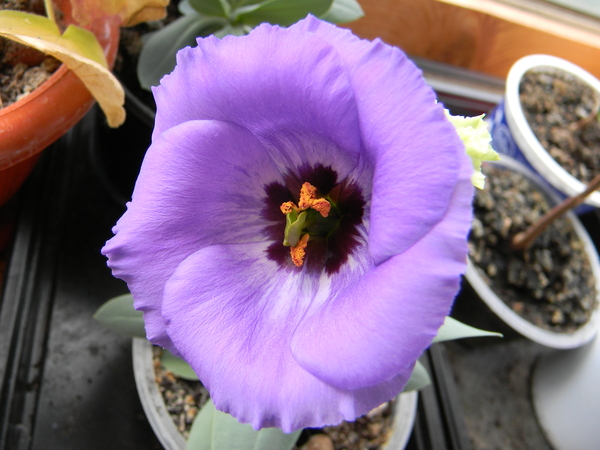 Eustoma, or lisianthus, has been a welcome purchase for many flower lovers since it first appeared on the market. The natural color of the petals of this plant is blue with slight variations, but thanks to the efforts of breeders, new hybrids appear every year.

So, if earlier eustomus cultivation was of interest only to owners of garden plots, because the height of the plant reached 50-70 cm, today there appeared and indoor varieties up to 30 cm tall. Remarkably, lisianthus flowers are perfect for cuttings, keeping their fresh appearance in a vase for a long time.

When to sow eustoma?

There is one thing that frustrates many hobbyists: In the first few months, seedling growth is almost imperceptible, and it may seem that something went wrong. However, you should be patient: During this period the root system is actively growing. Once it has reached its optimum size, the leaves will begin to grow quickly and flowering will be just around the corner.

If you sow in December, you can expect flowering as early as May. As practice shows, trying to postpone this event a few months earlier is not so successful: if you plant eustomas in October, they will develop very slowly, until the daylight hours increase, and still will not be ready to bloom earlier than nature intended. It is quite possible that this moment will come even later, as in my case.

Eustoma is propagated by seeds comparable in size to dust, so producers often cover them with a shell: this way it is much easier to give life to the plant – the contrasting color of the shell allows the seeds to distribute evenly on the surface of pre-moistened soil. 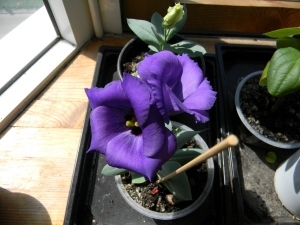 Soil for lisianthus should be chosen light, peaty, with pieces of charcoal. As a ready-made mixture is quite suitable composition for senpollias. Be sure to take care of drainage: although eustoma comes from South America, where the climate is quite humid and warm, it poorly tolerates stagnant water in the soil, from which it is easily affected by rot.

After sowing, cover the seed pot with cling film or glass to ensure sufficient humidity. This plant needs light for germination (that is why the seeds are not covered with soil) and a temperature of about 20-21 degrees. The first shoots will not be long to wait and may appear as early as the fifth day.

The watering regime requires special care: the substrate should be slightly moist, but not wet. Moisten the soil from above as the top layer dries out. However, if you do not forget about good drainage, regular application of fertilizers and the plant always has access to fresh air (not in a draught!), problems should not arise.

From sprout to bloom

Waiting for the first picking is the most difficult thing in growing eustomas from seed. The photo shows a 5-month-old sprout: after the appearance of 3-4 pairs of leaves, the “brood” was transplanted into separate cups. Plant roots are quite thin, but transplanting goes without much loss. 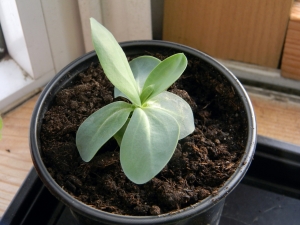 With the onset of spring, the intensive growth of the root system is joined by the development of the stem: it can already be seen between the leaves. The leaves themselves are covered with a bluish waxy coating that protects from sunburn. So as soon as you have an opportunity to take the eustoma out on the balcony, feel free to use it, not forgetting the gradual adaptation to brighter light: at first it is better to refuse a close location to the glass or shade the plant in the midday hours.

The setting of the buds occurs in early summer. In my case it was the middle of June – I think the reason was too early sowing and a late bad spring. From this moment the most interesting thing begins: the buds gradually increase in size, the petals form a beautiful “skirt”.

At first the petals are greenish and you may think you have got the wrong variety, but there is another pleasant surprise ahead: as the flowering time draws near, the color of the petals will begin to change. Even on the first day of flowering, the color is not yet as intense as you can see in the photo.

In my opinion, such beauty is a worthy payment for the wait, especially growing eustomas from seed is not such a difficult undertaking if you pay attention to the needs of the plant.