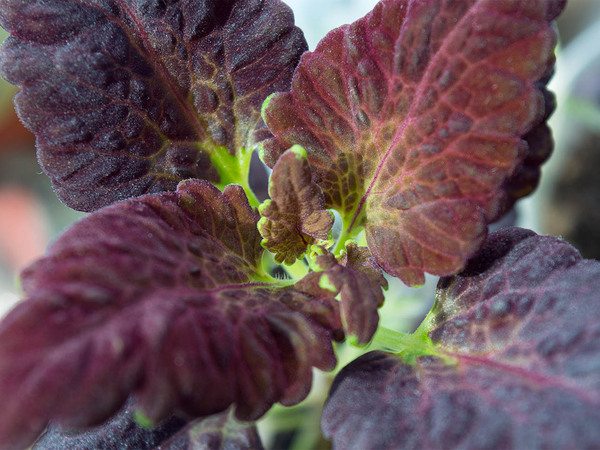 I love coleus: they grow fast, easily tolerate pruning and transplanting, suitable for indoor flowering. Especially pleasing to the eye these bright and unpretentious plants in the cold season, when the colors are disastrously lacking. The Black Dragon variety attracted both by its noble color, resembling velvet, and by the shape of the leaves.

I ordered the seeds to grow on the windowsill in winter, so I was guided not only by the decorative qualities, but also by the size of the plant. The stated height of the coleus Black Dragon is up to 30 cm. As for me, it is just enough to grow a neat compact bush. 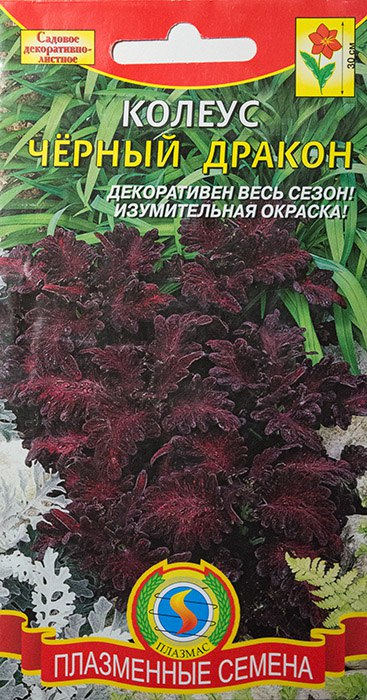 In August 2016, I paid 45 rubles for one packet of 10 seeds. The manufacturer differs from others in that it subjects the seeds to plasma treatment to increase germination and disease resistance. How effective it is, I can not say, but in my experience, I have not had to complain about the products.

On August 11, I planted all 10 seeds in universal peat soil. To my surprise, the first shoots began to appear earlier than promised on the package – on day 4 instead of 10-14. The daytime temperature was clearly above the recommended 21-25 degrees – south-facing windowsill. In total there were 8 seedlings.

On day 15, the first true leaves can be distinguished by a darker midrib. When the seedlings were 1.5 months old, the leaves had already darkened noticeably, and the green border had become quite thin.

I chose the two largest ones and planted them in plastic cups of 100 ml. In them the coleus sat until spring – by March, the roots finally braided the ground clod and one watering per day was not enough.

The plants spent 8 months with me – from August to April. Except for picking seedlings, I transplanted them only once, from a cup of 100 ml into a container of 200 ml. I did not use any fertilizer, and used the first available universal peat soil. As is typical of coleus, I watered once every 1-2 days – they like water. Backlighting in the form of an ordinary desk lamp was used in the evening when the sun was already going down – and not every day.

To form a beautiful bush, the manufacturer recommends pruning the crown. I needed to do this only once, when the trunk reached a height of about 15 cm. At the end of March, I decided to make room for hot peppers and gave the plants away. By the onset of summer, the size of the leaves had already increased on other people’s windowsills and they became wavy at the edges, as they should.

One subscriber on Instagram, after seeing a photo of the plant, complained that when she grew coleus with colored leaves, the result was always the same: a green leaf with a red middle. I think it may be due not only to over-variety, but also to the increased need of variegated varieties in light. And here’s why.

Seedlings before the use of backlighting

As the daylight hours approached a minimum, the coloring of the leaves became less and less consistent with the variety and became unsightly. Noticing this, I realized that a little more – and will begin to lengthen the internodes, and the form of plants will lose aesthetics, so I put coleus under a desk lamp. The problem disappeared literally before my eyes, and the leaves are amazingly beautiful color. Depending on the angle and brightness of the light it shimmered from a warm dark brown to a deep burgundy-purple with amethyst sparks – exactly sparks: the leaves sparkled in the sun!

Coleus Black Dragon is one of the most spectacular varieties I’ve ever seen, not in a picture. The picture on the seed package is not able to fully convey the shimmering shade of the velvety leaves in the sun. But the main advantage of this cultivar is that it needs the right conditions – without enough light it can be absolutely unattractive. Since I grew this variety on the window in winter and never fertilized, it would be biased to judge about the speed of growth – in my opinion, the development went at a quite normal pace for room maintenance.

Definitely recommend it! Including those who want to grow something beautiful from seed, but have no experience yet.