The berries of self-pollinating mammillaries 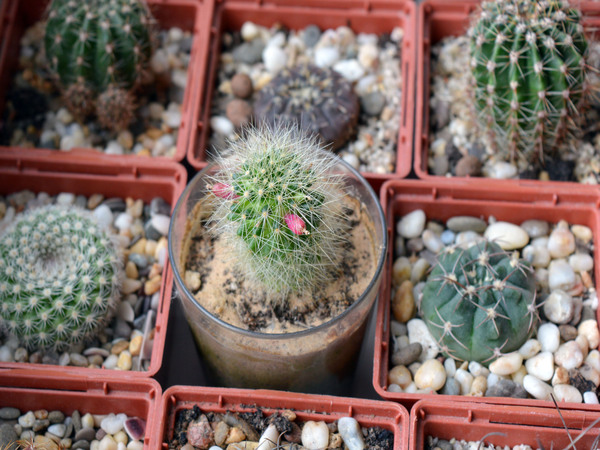 Mammillaria cacti have a significant advantage – some species are capable of self-pollination. It is with them many collectors get the first experience of growing their own seeds, for this one can forgive the modest size and unpretentious coloration of flowers.

Of course, this does not negate the possibility of cross-pollination – it will in any case produce more and better quality seeds. But if flowering at home does not happen easily, imagine what it takes to wait for two specimens to bloom at the same time!

I have two such mammillaries in my collection – prolifera and anniana. Both of them bloom very easily. At mammillaria prolifera I found a berry in spring, and it bloomed for the last time in August last year, before that the fruit was not visible. Mammillaria anniana opened its first two flowers in May, then the others appeared one by one. I must confess I did not expect pollination from it and was very surprised when I looked closer and noticed green berries instead of flowers. And today I noticed that the first two fruits became red, which means that the seeds are ripe.

The size of the berries is small – a little less than 0.5 cm in length. One fruit of mammillaria prolifera has long dried up, you can see that there are a couple of seeds. The second is harder to see and count them through the shell, but the berry is clearly not empty (this also happens with self-pollination). But mammillaria anniana has thinner peel on fruits, which is more transparent, so the harvest will be richer there.

Depending on the cactus species, the fruits have different sizes and can be either bright and large or completely inconspicuous – this is determined by the main mechanism of seed spreading in the natural environment. In this case, the bright color serves as bait for birds, which should eat the berries and “spread” the seeds further.

Other cacti benefit from scattering seeds from dry capsules right next to each other – the shade and thorns of an adult plant will give protection to the immature seedlings, and later on it is easier for a group of cacti to withstand the sun and retain precious dew and moisture from the rare rains.

By the way, I haven’t tried planting seeds of self-pollinated mammillaries yet. Maybe someone has had such an experience? I wonder how things stand with germination.